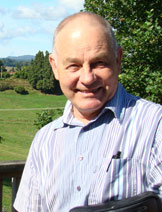 Professor Terry Healy, who died of prostate cancer in July 2010, was a coastal marine scientist internationally recognised for his ground-breaking research into coastal erosion, sedimentation and coastal hazard (e.g. tsunami) management, with applications particularly relevant to port and marina developments. His considerable accomplishments were acknowledged in New Zealand in 2010 through a University of Waikato Medal; a Queen’s Birthday Honour as a Member of the New Zealand Order of Merit; and life membership of the New Zealand Coastal Society – only the third person and first scientist to be honoured in this way.

Terry’s dedication and passion for the advancement of coastal science was an inspiration to all those who worked with him, not least the 120 postgraduate students whom he guided through to thesis completion and who are now undoubtedly making their own contributions to the field.

To honour both his memory and the work that so inspired him in life, the University of Waikato launched the Terry Healy Memorial Award. Terry once said that he wanted to be remembered for his support of student researchers and was also known for his considerable world travel in the name of coastal science. Therefore, we have created an award that provides funding for Waikato Earth Sciences postgraduate students with degree-related travel costs, nationally or internationally.

We invite you to join together in contributing to this lasting legacy of Terry Healy's work and values. His wife Judy-Ann and the School of Science have already made a combined commitment of $25,000, which is an excellent start in producing a significant endowment for this award.

All contributions will go in their entirety to the Terry Healy Memorial Award.

All donations will be channeled through the University of Waikato Foundation which will enable New Zealand tax payers to claim a 33.33% tax rebate.

For further information, please contact the Development Office on , development@waikato.ac.nz or visit www.waikato.ac.nz/foundation.