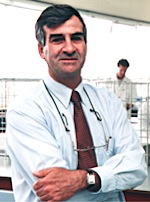 My research involves the study of volcanoes and their products, granites and related rocks, the tectonic history and magmatic systems of the south-west margin of the Pacific plate, and subduction related intrusive rocks. My particular interest is in the application of trace element, major element, and isotope geochemistry to rocks derived from magmas. Current research is concerned with a range of topics including modern volcanic rocks of New Zealand and the Kermadec volcanic arc, Tertiary aged intraplate basaltic volcanic rocks in south-eastern Australia and Antarctica, high grade metamorphic rocks and granites of the Windmill Islands in east Antarctica, Palaeozoic granites and related rocks in south-eastern Australia, and the tectonics and igneous rocks of the Vanuatu subduction system.

Three projects of particular interest at this time are: