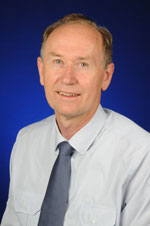 My personal expertise lies in the field of sedimentary geology, specifically: basin analysis, field mapping and sequence stratigraphy applied to outcrop successions. I am currently establishing a facility for seismic reflection mapping to extend the group's capability in basin analysis and sequence stratigraphy. I also have extensive expertise in low temperature thermochronology (fission track, (U-Th)/He)and geochronology (U-Pb by LA-ICPMS), having established laboratories with these facilities. I also have expertise in the leadership and management of science and engineering research programmes, and in interaction with industry.

My research interests include sedimentary and petroleum geology; tectonic development of New Zealand through the Cretaceous and Cenozoic by application of basin analysis (including sequence stratigraphy), low temperature thermochronology (fission track and(U-Th)/He methods applied to apatite and zircon), and geochronology (U-Pb dating via LA-ICPMS on zircon). I also have collaborative research projects in China (Tibet Plateau and eastern margin) involving thermochronology and geochronology.

As a geoscientist, I attempt to take an Earth Systems approach in my research work. I like to work from the large scale (e.g. tectonic development of New Zealand) down to the sedimentary basin scale and then to the formation or sequence scale. We seek to understand the processes, rates and dynamics of material moving from source (mountains) to sink (basins), and the sequence architecture within basins driven by past sea level changes. We have research projects across many parts of New Zealand.

The outcome we seek in much of our work is to better understand the context of, and prospectivity for, petroleum resources in New Zealand's basins, and to this end we are funded by the Foundation for Research, Science and Technology (FRST), and interact with with oil and gas exploration companies. Please view my Sedimentary and Petroleum Research Group website.

As something completely different, in 2002 I established an industrial energy efficiency research group within the faculty. The group has six mechanical and process engineers (funded externally, including FRST) seeking to improve process and energy efficiency in the dairy processing and pulp and paper industries.