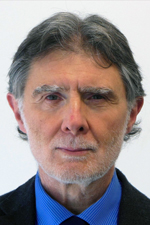 Bill Redman-White spent much of his career from 1990-2011 with NXP (and its predecessor, Philips Semiconductors) as an Engineering Fellow, specialising in analogue and RF design, working in Southampton, UK, San Jose, California, and in Caen, France.  Within NXP/Philips, he worked on a wide range of projects and products, covering optical storage, cellular phones and WLAN, analogue and digital TV, and automotive applications.  He was previously with Motorola, GEC-Marconi Research, and Post Office Telecomms in the UK. Presently he also works with HiLight Semiconductors on optical communications.
Concurrent with his industrial activities, he has also held long-term part time academic positions, at Southampton University, UK, since 1983; and has been at Waikato contributing to research and teaching since 2010.  He was associate editor for IEEE Journal of Solid-State Circuits from 1996 to 2002, served on International Solid State Circuits Conference TPC from 1999-2013, and has twice been technical program chair of the European Solid State Circuits Conference.

Supervising and supporting students in circuits, communications and power management.